This is my first blog post here regarding my life with chronic illness. I have a congenital condition called “Panhypopituitarism”. Don’t know what that is? I’m not surprised, it’s very rare. That’s why I made this short video explaining it.

If you went to high school with me, you probably know I was on the Speech team for a while, and I was interested in Theater. If you know the teacher I’m taking about, please don’t drop her name. I’m not sharing this to shame her.

One year, I auditioned to be in the play “The Princess and the Pea”. It was a comedy musical. A lot of my friends were in it, and I was able to get a minor role as a chamber maid character. I had a lot of fun attending practices and getting to know the other students.

Unfortunately, I kept getting sick. I’m not talking about your common cold. I’m prone to respiratory infections that can get pretty serious, and I had to rest often, so I missed practice a lot.

When I did get to come to practice, I really did try hard to get caught up and learn the lines and choreography. It was obvious I was falling behind, and I was embarrassed when I had to be singled out to learn what everyone else had already done. I still tried, though. I wanted to help make the play a success.

The teacher that directed the school play also taught a theater class I was in. One day, she asked to speak with me out in the hallway. In private, she explained to me that I had missed too many practice sessions, so she was removing me from the play. I was heartbroken, but I understood. She was right, I had fallen behind too much. I just nodded and said okay. She then went on to tell me she was disappointed in me. I very clearly remember her words. “I thought you were going to be my strong freshman”.

She looked me dead in the eyes and said “This is a big deal. Why aren’t you crying?”

I was stunned, but I replied simply “I’m not going to cry in front of you.”

We retuned to class and I sat at my desk with my head down in my arms. Ashamed.

I regret never explaining to her the extent of my illness. Hell, at the time I didn’t even know how serious my condition was. I just took my medications every day and never really looked too deep into it until I was much older. She knew I was missing practice due to illness, but I don’t think she understood how serious it was.

Maybe it’s not fair for me to resent her so much because she couldn’t have known how serious it was, but I still look back on that memory with regret, shame, and anger.

Teachers, please think before you speak. If it wasn’t for the way I was talked down to that day, I probably wouldn’t have given up on speech and theater like I did. You are there to enlighten students, not to shame them and beat them down. Before you start talking down to someone, at least try to understand what they are going through.

Thanks for letting me get that off my chest. 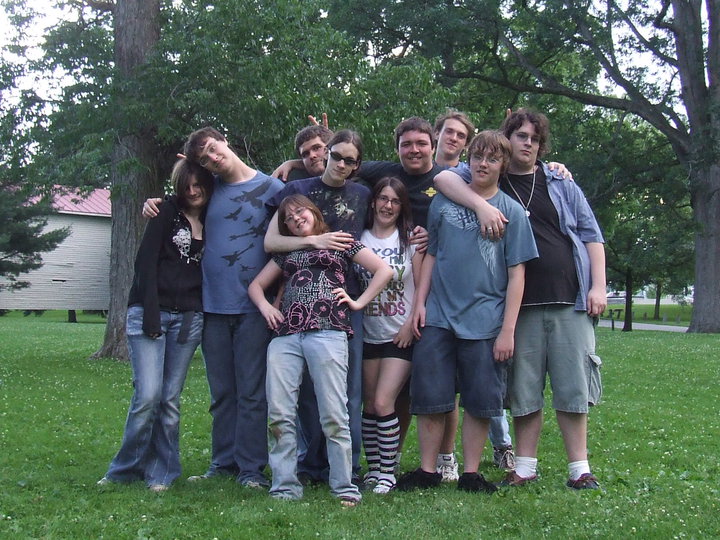 This is a picture of my friends and I from High School, taken in 2010.
I’m the one in the grass-stained jeans. haha

One thought on “Chronic Illness Stories: Tales from High School and a message to teachers”